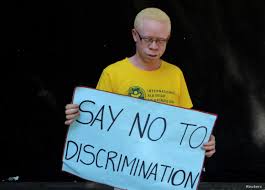 The Ministry of Gender, Community Development and Social Welfare says the National Action Plan has tremendously improved the welfare of persons with albinisms in the country.

Principal Disability Programs Officer in the Ministry Grace Massa said this in an interview with Timveni as attacks, killings and abduction of people with albinism have gone down.

Massa said since the launch of the National Action Plan in June 2018, there have so far been only 3 recorded cases of abuse against persons with albinism this year compared to over 60 registered between 2016 and 2017.

Through the National Action Plan, Massa said, "Needy students are now being assisted with school fees and provided with required materials to offer protection from skin cancer."

According to Massa, implementation of the action plan has been successful owing to collaboration between the Ministry of Gender and other line ministries, departments and agencies.

Massa citied the Malawi Human Rights Commission as having played a critical role in raising awareness on the rights of persons with albinism.

In the 2021/2022 National Budget, Three Million Kwacha has been allocated for the implementation of the National Action Plan.